Bassocontinuo was founded in a small laboratory in Bergamo (ITALY) in 2008. Thanks to perseverance and experience, during the years makes its way on international markets, apparently overflowed.
Nowadays Bassocontinuo exports over 40 countries in the world, thanks to important partnership and qualified dealers.

Since the beginning our core business is based on two main factors: we have a scientific approach on vibrations problem (cooperating with a very important independent laboratory which makes accelerometric analysis) and we are strongly “design oriented” because each rack it’s first of all a furniture (so it has to be nice to see).

We are strongly connected with our territory: we’re cooperating with tens of workshops and artisans which like to create unique objects, helping us to bring our italianity around the world. We’re “made in Italy” ambassador and we’re very proud of it.

Actually we’re working on 1.200 sqm with a quality control department to check any single piece: nothing is left to chance. We strongly believe into research and cooperation: we’ve very important consultant who are helping us to set up any detail. We head towards on innovation and a perfect combination between performance and aesthetic. 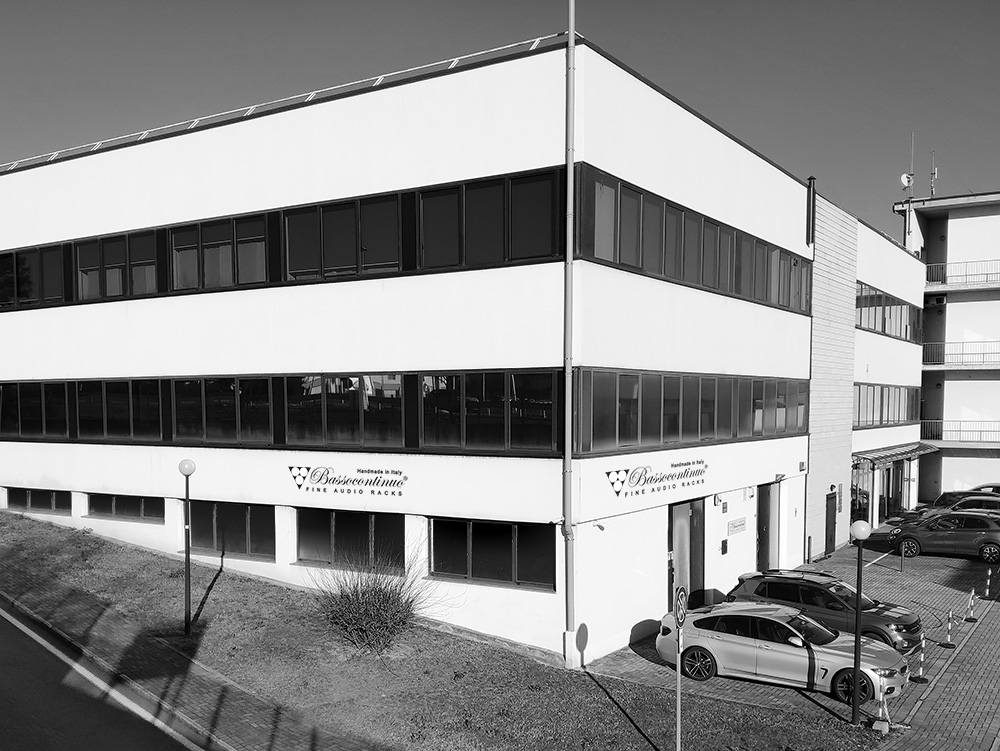 Hystory and countries over the year

March: The company is founded in Bergamo – Italy.
A few projects became reality. Accordeon is our first full modular audio rack.
During September we attend at Top Audio Show in Milano and model Accordeon is rewarded with Top Award 2008

Internationalisation process is started and we immediately receive distributors requests.
During May we attend at HIGH END Show in Munich with a small booth were we display REFERENCE LINE.

ZEN LINE have seen the light a few month before (curved lines become straight), model SENDAI is presented at HIGH END 2012 in Munich.
CLASSIC LINE is now completed with models CYMBALON and VIELLA.
Model BODHRAN (REFERENCE LINE) is rewarded with Super AV Award in Hong Kong.
Turning point is in the air…

Company moves from the old and small laboratory to the new factory facility (600 sqm).
ZEN LINE is completed with models SHIBUYA and KYOTO.

A milestone in our history: REVOLUTION LINE is born after two years of development and huge investments. AEON is officially presented during HIGH END 2014.
It’s probably the most important step for Bassocontinuo till now.
Distribution network is still growing and starting the interest of market leaders in each country.

REVOLUTION LINE is a worldwide success!
We are the first and only carbon fiber rack manufacture in the world: the line is completed with models ARGO and EOS.
At the same time, during HIGH END 2015 have seen the light the first prototipe of our future tailoring service: B by BASSOCONTINUO is now reality (a bespoke product with thousands of combinations for the most demanding customers).
Following automotive industry, we introduce our first on-line configurator where anybody can play and develop a made on measure rack.

A new corporate identity is done as well as a new online configurator.
Revolution Line is updated at 2.0. Stability, performance and aesthetic is enhanced to reach the perfection.
B by BASSOCONTINUO, our tailoring service is now fully operating and very well appreciated all over the world.

The new CLASSIC LINE is ready! A concentrate of technology, appeal and skillful handicraft. In a sentence: our luxury entry level. But it’s just the first of great surprises for our most important year.
During the HIGH END 2018 we presented our 10th ANNIVERSARY Limited Edition rack: the highest expression of Italian craftsmanship.
The new REFERENCE LINE is launched during HIGH END 2018.
Our new HQ is finally ready: we’ve now totally 1200 sqm which include offices, warehouse and R&D department.

The upmost expression of technology and craftsmanship: ULTIMATE LINE is now a reality!

Despite COVID situation, new distribution contracts have been signed.

ULTRAFEET is launched with great success on November as new accessory line.